Smart Engines‘ AI-driven software was equipped in passport e-gates Sapsan at Sheremetyevo International Airport SVO for contactless border control on international flights. Passport e-gates will also be expanded for use in airports under the plans in an attempt to significantly improve the efficiency of Border Force officials’ services by reducing the manual identity and security checks. 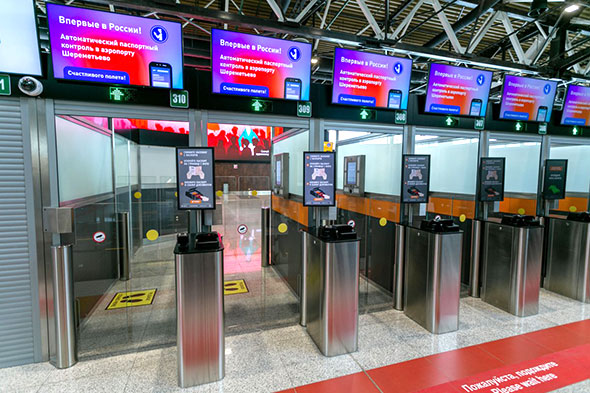 OCR technology scans data from passports, allowing to automate the process of checking documents. The advanced AI software eliminates security breaches and is completely secure for both passengers and airports’ border control systems. This solution helps border force officials to comply both with the local & international security standards (GDPR, CCPA, and others) for personal data processing to satisfy the strict demands of regulators. SDK doesn’t transfer data and images for processing to Smart Engines or to any third-party services, doesn’t save data or images (the processing is carried out in the e-gates’ local RAM) and doesn’t require internet access.

The automated system for passport control Sapsan with built-in Smart Engines OCR was developed by GazIntech. As of now, Smart ID Engine has been installed in 20 Sapsan passport e-gates. Based on the latest biometric recognition algorithms and high-tech hardware, Sapsan accelerates the process of passenger control, making it convenient and understandable for citizens, which in turn significantly reduces waiting time at the borders, ensuring optimum security.

Smart ID Engine is a comprehensive AI-based tool for automatic ID scanning with document authentication, data consistency checking of over 1810 types of ID documents from 210 issues worldwide, being installed in e-gates, queuing at passport controls could become a thing of the past. According to SVO officials, passenger satisfaction has increased significantly since the installation of the e-gates with AI-driven software. As for the throughput, it increased three times at the border control.

Rosbank has implemented an artificial intelligence solution for the paperwork