As you already know, we specialize in image processing here, at Smart Engines. Not so long ago we published an article about binarization of fine-structure tomographic images where we attempted to explain what the x-ray tomography method is about. Today we’ll continue talking about the possible challenges that arise when working with tomographic images, namely the cupping effect artifacts and their quantitative assessment.

Let’s examine a 10 ruble coin. Its photo is shown in Figure 1, on the left. These coins are struck in steel, and then the brass plating is applied to the finished product. That means that the coin consists of two optically homogeneous materials. The first material is a thin layer on the edges, the second material is what the coin itself is made of. The result of tomographic reconstruction of the coin’s cross-section is demonstrated in Figure 1, on the right. The reconstruction was performed using the classic convolution and inverse projection method without correction of the estimation results [1]. Instead of the expected homogenous brightness value inside the coin, we can see the gradual darkening from the edges to the center. And it looks more or less consistent closer to the center of the object. This kind of distortion is known as “the cupping effect”. 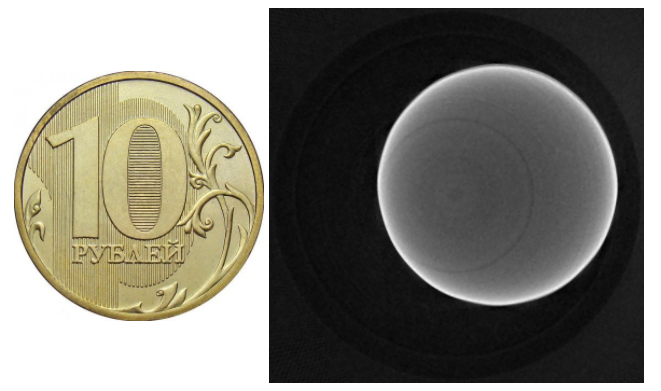 Let’s find out what causes the cupping effect in the images produced by the x-ray tomography method. This method could be divided into two stages. The first stage is the collection of 2D images with the help of a tomographic device. We’d like to remind you that during tomographic scanning the object placed on top of the holder rotates and gets x-rayed periodically, at a defined angular step. The radiation that passes through the object is registered by the position-sensitive equipment, and as a result the 2D image of the shadow projection is created. One of the registered images of the coin is shown in Figure 2. As you can see, the coin was placed at an angle. Since the entire object didn’t fit in the detector’s field of view, the final image (Figure 2) was created by pasting together a few separate fragments (with some overlaps). The grey vertical lines around the areas where the fragments were put together are caused by nonuniformity at the edges of the detector. These nonuniformities cause circular-shaped artifacts, but we’ll talk about this problem some other time. We just want to add that for our experiment we used a unique detector [2] designed for spectral measurements while maintaining the spatial resolution.

Figure 2. A 2D image of the coin registered during the tomographic experiment

The registered 2D images are going to be used during the second stage of the tomographic experiment. The objective at the second stage is to determine the inner spatial morphological structure of the sample. If we assume that the tomograph uses the radiation of a single wavelength (i.e. monochromatic), we will be able to solve this reconstruction problem by a means of the Radon transform. The Beer-Lambert-Bouguer law links the attenuation of x-ray radiation and the properties of the material. After the standardized value of each pixel from the set of the recorded images has been logarithmized, the pixel values can be treated as the points in Radon space. Here the mathematicians would possibly want to clarify the terminology and introduce another mathematician, but we’ll continue making references to Radon. And that is why. Although the tomography problem is three-dimensional, in some cases it can be viewed as a number of two-dimensional problems. As long as our calculations take place in the plane, we have every right to refer to the Radon transform. The function we get as the result of the Radon transform is the integration product of the original function of two variables in all possible straight lines. In the procedure of computed tomography, straight lines define the distribution of x-ray radiation from the source to the pixel detector, the integrated function defines the distribution of the attenuation coefficient of x-ray radiation by the sample. The rotation of the sample provides the complete set of directions. In summary, the tomography problem can be described as a reconstruction of an unknown function based on its integrals along the directions of probing. An important feature of the Radon transform is its reversibility. This feature makes it possible to reconstruct an unknown function if we have an infinite number of its integrals along all possible straight lines. The well-known tomographic reconstruction algorithms, such as the Filtered Back Projection algorithm and the Direct Fourier reconstruction algorithm, are based on the above-mentioned reversibility property.

However, the x-ray tubes used in medical and industrial tomographs are the broad-band radiation sources. Even if we assume that the main attenuation factor is absorption and ignore the other effects, such as elastic and inelastic scattering, and reemission, the absorption coefficient depends both on the atomic number of the element and the energy of radiation. The lower the energy of radiation, the higher the absorption. With that said, the recorded variables are expressed by a complicated calculation with the added integration over energy. A strong mathematical transformation that would help to make the relationship between the distribution of the absorption coefficients and the number of recorded quant linear, doesn’t exist yet. The use of the popular reconstruction algorithms on the measurement result data which has been standardized for the spectrum integral, causes the cupping effect in the reconstructed images.

The distortions due to the cupping effect in the reconstructed images result in the incorrect interpretations of the results of the tomographic experiment. This problem occurred with the very first version of a tomograph. By the way, the first computed tomograph was a medical device and it was designed by G. N. Hounsfield in 1969 [3]. In medical tomographic images, the cupping effect manifests itself when the bone tissue is scanned, because the bone tissue attenuates radiation more than any other tissues. This effect was discovered and described by R. A. Brooks and G. Di Chiro in 1976. Since then there were many attempts to eliminate or at least to suppress the circular distortions in the tomographic images.

Today there are a great number of approaches to tackling this problem. These approaches can be divided into two groups: hardware based and software based solutions. The hardware based solutions include the methods of spectral composition change of probing radiation. For instance, an x-ray radiation filter can be installed in the optical path of the tomograph, between the x-ray tube and the sample, and it will attenuate the low-energy part of the spectrum. The software based solutions rely on the algorithmic decisions for image processing. Both recorded and reconstructed images can be processed here.

Each method has its own specific conditions for their applicability and, oftentimes, they have one or several adjustable parameters. For example, both the material and the thickness of the x-ray radiation filters can be modified in the hardware based solutions.

In order to determine the most appropriate method for suppression of the cupping effect and the option settings for the chosen method, the visual estimation of the results based on the expert opinions is often used. And it consists of the analysis of the brightness profile of the reconstructed image, as shown in Figure 3.

Figure 3. The reconstructed image (left). The image side-view at the spot marked by the line in the image on the left (right).

These profiles are created for a few reconstructed images of the same sample while applying various methods for reducing the circular artefacts. The experts decide which method works best for suppressing distortions based on their visual estimation. However, this approach is subjective and ineffective because slight changes would be hardly perceptible to a man’s eyes. Therefore, there is a need to create a method for the quantitative assessment of circular artefacts in the reconstructed images. And that’s exactly what we did.

When we were working on this method, we took a note of the fact that the circular distortions occur inside optically-dense objects in the form of gradual darkening of the object from the edges to the center and stable values in the central region of the object. Therefore, the problem of the quantitative assessment of the cupping effect consists of the assessment of distortions of the individual objects in the reconstructed image. The principal idea of this method is the introduction of the Euclidean distance map. The map is constructed by applying the distance transform [4] to a binary image. Two types of pixels in a binary image identify the objects and the background. The transformation result is a grayscale image with integer values. These values equal an Euclidean distance from each pixel to the closest boundary pixel. There is a binary image shown in Figure 4, on the left, and the image which is a result of the distance transform, i.e. the Euclidean distance map, on the right.

Based on the Euclidean distance map of the object, the estimate of the circular distortions is calculated as the variation in intensity between the boundary pixels and the central ones. As a result, we’ll get a value that indicates the degree of the cupping effect intensity for each object. If there are several objects present in the reconstructed image, the average value is calculated and it’s considered to be the final answer.

Using the framework of the above-mentioned method, we’ll be able to build an algorithm which has a two-dimensional reconstructed image and a mask of this image with pre-labeled objects as the input parameters. The output of the algorithm would be a quantitative measure of the cupping effect. The algorithm consists of the following steps:

We published the algorithm in the paper «Method for numeric estimation of Cupping effect on CT images» which was presented at the international conference ICMV in November, 2019, Amsterdam, Netherlands [5].

In order to demonstrate the performance of the proposed method, let’s turn to the image of the coin again. The numerical value for the cupping effect intensity in the original image (Figure 5, on the left) was 0.50. Then the reconstruction method with the input data adjusted for the generation model of the tomographic projections in polychromatic conditions was applied to the image. And, as a result, the visual representation of the reconstructed image improved (Figure 5, on the right), and the intensity value decreased to 0.18.

Figure 5. The reconstructed coin before the method for suppression of the circular artefacts was applied to it (left). After applying the method (right).

Today we reviewed the problem of circular artefacts in the tomographic images. We attempted to explain what can possibly cause these distortions and to show the need for the method for the quantitative assessment of distortions. We built the algorithm for the quantitative assessment of the cupping effect intensity which has a number of advantages. First of all, the estimate calculated by the algorithm doesn’t depend on the number of objects and their sizes. Second, the quantitative assessment doesn’t depend on the optical density of the image in its entirety and its objects. Therefore, the designed algorithm can be used for automatic processing of the results of the tomographic experiment. It can also be used for selection of the parameters of the methods for suppression of the circular artifacts.